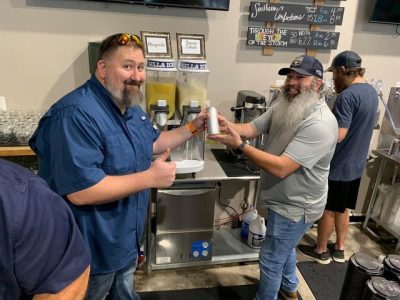 After celebrating their second anniversary, Gilla Brewing Company, located in Gonzales, off of Hwy 44, hosted their first annual Gilla Gives Back event. This year, Gilla decided to choose the VFW Post 3693 and help raise funds for their members in honor of Veteran’s Day. After several options of a beer to brew for the event, the brewing team decided to brew Gilla’s first American Amber style beer, DD-214, which was named with the help of a few of Post 3693’s members. A portion of the sales of this beer will be going directly to the local VFW Post.

Gilla Gives Back is something that the brewery is excited about, an annual event to give back to the community, that has helped them get to where they are today. They will be considering other local organizations in Ascension Parish for future years.

The first Gilla Gives Back was a tremendous success, there were many members of the VFW that came in to enjoy the event, as well as patrons and first time visitors. There was a local food truck, Oak and Smoke BBQ, as well as Mr. Milkshake, that provided delicious options for dinner. Live music was playing through most of the event, thanks to Amber Rae and Bo Burkes.

The members of the VFW were of great assistance, from helping Gilla name and design the label for DD-214, to even helping can the beer that was sold to the public. They were also treated to a tour of the brewery and some sampling of the beer while they worked. Gilla is honored to have been able to help out a group of people from our community that have given so much for us to be able to enjoy events like this.

Gilla Brewing Company was founded by three men from the local home brewing community, Alex Shillings, Brad Andersen, and Derek Stewart. They opened the doors to the brewery in October of 2019, and have been able to keep them open even after being shut down mere months later, due to COVID-19. The owners are very happy to have the opportunity to be the first craft brewery in Ascension and be able to provide a fun and laid back environment for craft beer lovers, as well as beginner craft beer drinkers, to come to enjoy many different varieties of ales and lagers.

You can walk into Gilla and try a beer anywhere from a praline pastry stout to a peppermint white chocolate cranberry sour. The menu is always in rotation, there is no beer that is currently kept on tap. Every visit is a completely new experience, so you are able to come in for a glass of beer or even try a few small pours. Gilla also offers a selection of beer to go, for your convince of enjoying the beer at home or with your friends.

Gilla Brewing Company is the name sake of Alex Shilling’s father, Kevin “Gilla” Shillings, who passed away in 2015, after a battle with cancer. Both of Kevin’s sons, Alex and Kam, as well as his wife, Becky, are all involved in the running of the brewery, in memory of their lost loved one.