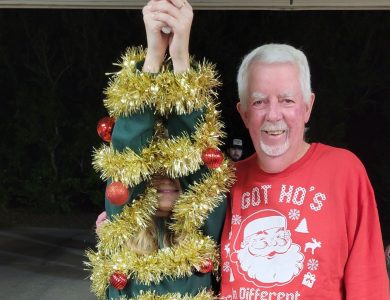 “You can feel it in your bones, you know a change is gonna come, Oh, and a change never done nobody no harm…” Tony Joe White.

Uncle Bill-a disillusioned dreamer who has gotten so old that he went to an antique auction and three people bid on him.

Kid 1-But how did you get here, Uncle Bill? I didn’t see your truck pull up.

Bill-No truck for me this year. In the spirit of the season, I decided to come by sled this year. And a nice basketball coach named Willie Green from New Orleans drove me. Said he had lots of experience with leading a dog team.

Kid 2-Are you going to tell us the one about the time you and Aunt Diane and Aunt Liz took the family car to Moonlight Inn on Christmas Eve and didn’t get home until the next morning and all the younger siblings’ gifts were in the trunk?

Kid 3-No, tell us about the Great Bottle Rocket War when y’all set the pasture on fire and the fire department had to come out on Christmas Day.

Kid 4-I want to hear the one about when y’all stole the reindeer and put them in compromising positions by Highway 73.

Bill-Now, now boys and girls, those are some oldies but goodies to be sure but wouldn’t you like something a bit more current? How about a local guy on a national search for the best gift to please his rich boosters-with a little “Toy Story” thrown in?

Kid 1-Man, that kind of story could take some strange twists.

Bill-You have no idea, my young friend. So let Uncle Bill do his best for international relations by mixing some of this Caribbean rum with some Pennsylvania egg nog and we’ll get started. Oh, and hang a little mistletoe over my head in case my favorite Christmas tree Cousin Sydney comes by. Now this all began a few years ago…

Woody was a Baton Rouge guy who had wandered over to Texas and brought in some of the top gunslingers in the nation to that state. He had come home to help his old home school and had already made a splash by bringing in Calamity Kim-a feisty, straight-shooting type-who had made quite a name for herself out in West Texas and Joltin’ Jay-a hard-hitting Arizona Ranger- to revive some of his fading programs.

But now Woody faced a bigger problem. Some of the spoiled boosters wanted to get rid of Mr. Ed-the popular leader who just two years ago had won the national championship and had slain the evil Alabama dragon that had ravaged the region for so long. But hard times had recently befallen the team and it was now Woody’s unpleasant task to put the old horse out to pasture.

Kid 2-Was Woody’s friend Buzz Lightyear around to help him?

Bill-No, but some of the rewards being offered to replace Mr. Ed were astronomical indeed. Anyway, Woody and Mr. Ed agreed that it was time for him to leave and after a dramatic win over Woody’s old school, Ed took the money owed to him and went out to pasture-although his pasture appeared to have a lot of sand and warm water-to cavort with young fillies for the rest of his days.

Now with Christmas fast approaching, Woody began a search for the best gift to please his subjects. As you would expect, there were many opinions and not everyone was going to get what they wanted. Some favored a Nittany Lion from the North and others wanted a West Texas Bear from the same place Woody had found Calamity Kim. But others argued they might not play so well with Tigers.

Kid 3-Lions and Tigers and Bears, oh my! Is Woody going to have to go off to see a wizard?

Bill-I’m sure there were times when he thought he could use one because the shelves were getting emptier than a Wal-Mart on Black Friday. It seemed every time the perfect present seemed in reach-like a noble Spartan from the same school where St. Nick had come from years ago-he was snatched up before Woody could seal the deal. And the natives were getting restless to say the least.

Some of the children began clamoring for the “Lane Train”-a sleek, handsome engine from a neighboring state-that ran full speed when it stayed on the rails. Opponents pointed to rumors that the “Lane Train” could run off the track occasionally-especially, when distracted by a nice caboose.

Others thought “Lincoln Logs” would be the ideal choice to build the program back where fans could enjoy the “life of Riley” in Tiger Town once again.

Distractors pointed out that “Lincoln’s Logs” had not held up so well when faced with strong fronts from the Southeast-having collapsed all together on some occasions.

Many thought Woody was obsessed by “Jumbo the Clown” whom he had brought in during his days in Texas after Jumbo left a Florida circus in shambles. But after Mr. Ed’s Tigers got the best of Jumbo in Ed’s last game, the frown Jumbo wore was not painted on and some members of the crowd were not amused at his juggling act anymore and were grumbling about getting their money back.

Then when Lincoln decided to take his logs to Hollywood and maybe land a spot in a Disney film, things didn’t look good for Woody at all.

Kid 4-Maybe Woody needed an “Elf on a Shelf” to help him pull off a Christmas miracle.

Bill-Either that or a Hallmark Christmas script writer and though he didn’t have either, Woody did have a leprechaun up his sleeve.

So imagine the shock waves all over the country when Woody announced the nationally famous Machine Gun Kelly as his Christmas gift to all the good little Tigers. All over the land, people wandered out loud how Woody had pried such a rare prize from his most prestigious position in the Midwest when Kelly had ruled over one of the top gangs in the country.

“Luck of the Irish,” smiled Woody. “I just went to Kelly Services Employment and there he was.

Kelly promised to assemble a gang of soldiers similar to the ones in the old Clint Eastwood movie “Kelly’s Heroes”. “The only difference is they were going after German gold to thwart the Nazis while we will be gunning for a Silver Crystal ball coveted by all America.”

One of Kelly’s first hires was an old Tiger called “Frank the Tank”. Frank had gained that reputation years ago for his ability to bulldoze his way into cities like New Orleans and bring back the best pieces for a championship puzzle. The move was extremely popular and even the nay sayers admitted that Machine Gun might be able to shoot his way to the top.

Kid 1-So most boosters must have been pleased with Woody’s gift.

Bill-You would think so but not everyone was thrilled with the present. One of the Tigers’ top gunslingers Mad Max announced he was leaving and taking his little brother with him. Rumors had the Johnson and Johnson duo headed to join the Florida circus that Jumbo had abandoned. Ironically, Kelly’s first test next season would be against that Florida State show under the Superdome big top in an event P.T. Barnum would have no trouble selling out.

Kid 2-It would seem Woody would live happily ever after the way things worked out.

Bill-Well, he should have a holly, jolly Christmas as long as Machine Gun Kelly brings in some top associates, Calamity Kim keeps winning some roundball games and Slick Willy keeps dodging those pesty investigators that keep snooping around. Then if Joltin’ Joe can put together a lineup without three sure outs in it, well, then it will be a Happy New Year also.

Kid 3-I’m glad the Tigers got what they wanted for Christmas. By the way, Uncle Bill, what do you want?

Bill-Oh, the same thing as last year-for people to be a little nicer to one another and to be a lot more forgiving and to be a bit more generous to others who are not as fortunate…

Kid 4-I don’t know if I can get that for you, Uncle Bill.

Bill-Then how about a neck brace? I got a hell of a crick from watching that 5-A championship game between Ponchatoula and Zachary where they combined for a record 83 passes. So much for the days of “three yards and a cloud of dust”.

Kid 1-If it really bothers you Uncle Bill, I can get you a massage.

Bill-But instead of a “massage”, let’s just join in and send a holiday “message” (with apologies to Inspector Clouseau) to our readers…

Everyone-Merry Christmas and Happy New Year to everybody! 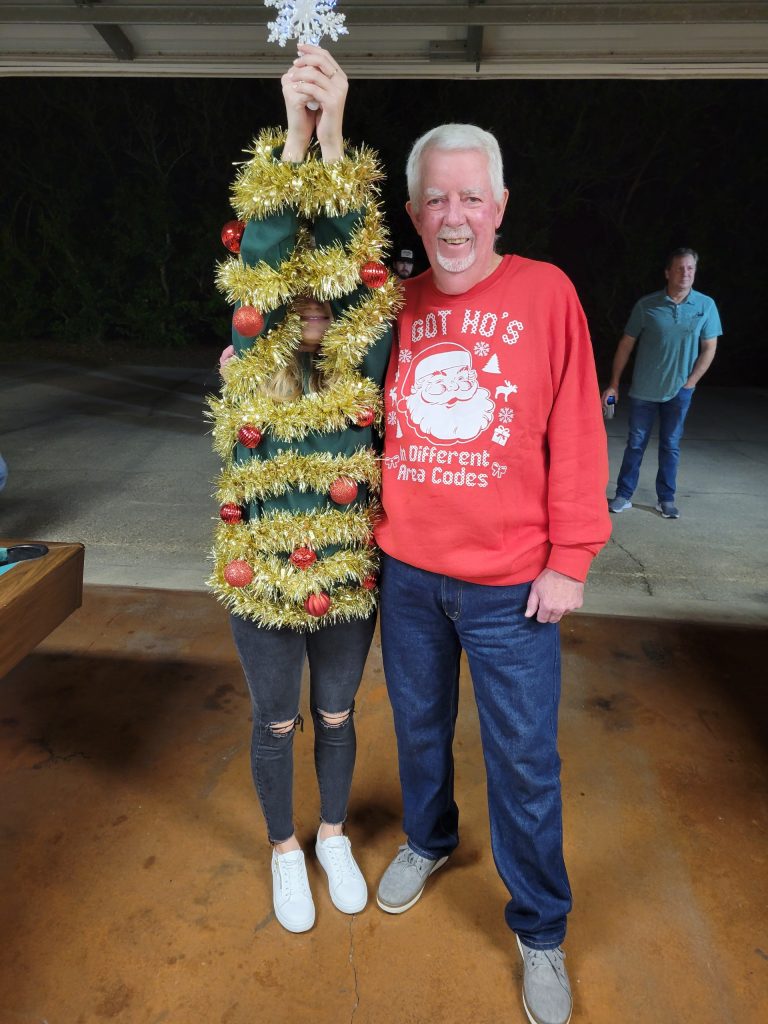