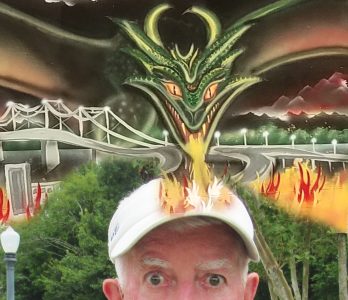 “…But most of all, may your life be free of dragons, and if by chance it isn’t, then may St. George rise up and slay them all. No one should have dragons in their life…” An Old English toast.

Now that St. George’s namesake Georgia has risen up and slain the evil Alabama dragon, the spoils belong to the latest heroic knight in red and black armor-one with the incredibly marketable name of Kirby Smart for all you Name, Image and Likeness (NIL) agents.

Just be careful with that last name, Kirby. When LSU basketball coach Will Wade was caught on tape a few years ago mentioning the “smart” thing (allegedly in reference to the recruiting of star guard Javonte Smart), it brought down more investigators-NCAA and feds alike- than when El Chapo came out of that tunnel.

But Smart’s Junkyard Dogs did get 2022 off to a rousing start giving hopes of a better year to everyone battling personal dragons of their own.

And who knows-maybe this is the year medical science-with a little help from the general public- can conquer the dastardly Co-Vid beast with a bit more assurance than the mixed messages of last year like…”The worst is over.”

“Don’t worry if you’ve had your shots.”

“It’s now safe to take your off your masks.”

“No-wear masks for another decade!”

And so on-until the only information that made any sense was when the World Health Organization (WHO) declared that dogs could be released from hostage because they could not carry the disease and the medical report headline read, “WHO Lets the Dogs Out”.

So following the advice of that great American philosopher Lou Holtz who once said after a monumental setback, “That’s why the Good Lord put our eyes in front of our heads instead of the back so we can see where we’re going-not where we’ve been,” let’s look forward with rose colored glasses-and maybe a couple of glasses of Rose’-and see what 2022 has in store for us…

“When the line moved us to a 3-point dog, you could tell the ‘smart money’ was on the other Dogs,” laments the likeable Tide mentor.

The NCAA immediately launches an investigation into Kirby Smart, actress Amy Smart, Will Wade (again) and all of the Mannings who appeared in the latest ads.

“Gosh, Tom, how many is this-20, 30?” laughs Commissioner Roger Goodell as he presents the Tom Brady MVP trophy to Tom Brady as he hugs his glamourous wife Gisele.

In the other locker room the usual stoic Belichick is adamant about a contract he has discovered signed by Tom Brady that begins, “I, Tom Brady, do hereby agree that in exchange for my soul, I will gain eternal youth and a supermodel bride that makes more money than I do.”

The pact is also signed by a mysterious B.L. Zebub.

March-With Will Wade sitting out another suspension due to Saban’s “smart money” comments and new baseball coach Jay Johnson battling a strange new virus, LSU’s women’s coach Kim Mulkey takes over all three teams with unprecedented success. First, she guides the baseball team to an undefeated SEC start. Next, she leads both basketball teams through March Madness into their respective Final Fours defeating old rival Geno Auriemma of Connecticut in the process prompting a plane with a large banner to fly over the state with the sentiments of many written on it-“Bite me, Saban, Geno, the LA Rams and you too, Tom Brady!”

April-President Joe Biden welcomes the Georgia football team to the White House and proudly proclaims, “Let the people of Georgia be assured that a Russian attack on our Black Sea friends will be met by U.S. resistance.”

San Diego native Xander Schauffele wins the Masters and Biden welcomes him to the White House also.  “We are proud to have one of our German allies win such a prestigious tournament,” says Biden of the California golfer.

“Once he realized he didn’t have that plow to pull behind him, he just hauled…uh, just took off,” says Smart.

The defeated favorite Bama Breeze ran with the winner for the first mile.

Some of the other losers were not as gracious. Former President Donald Trump’s entry Storm the Castle ran erratically and finished 10th. Trump refuses to acknowledge the winner and has only one curt comment-“Nobody likes a Smart ass.”

July-Sweltering heat causes power outages nationwide including a massive computer outage and loss of cell phone service. The positive effects are that people actually start talking to one another face-to-face once more and nobody gets any telemarketing calls about health care supplements or extended car warranties.

August-Following the chaos of the previous month, AT&T announces a new fool-proof product-the Kirby Smart Phone. Sony follows suit with a Kirby Smart TV and vacuum cleaner giant Kirby introduces a Kirby Smart vacuum. When questioned about the timing of the release of these innovations so late in the year, all three corporate statesmen reply in unison, “These ‘Smart’ items will really kick in the final quarter.”

Five-star transfers from all over the country begin showing up on top of a big rig with local deep-pockets attorney Gordon McKernan and enrolling at LSU.

“In soccer ‘nil’ means nothing,” points out the savvy lawyer, “but in college football NIL means big bucks,” referring to the name, image and likeness payouts.

The new-look Tigers make short work of early season opponents and McKernan takes care of the players who wreck their new Mercedes.

October- Racial tensions run high at the Baton Rouge Zoo as protestors clash over whether the zebras are white animals with black stripes or black animals with white stripes.

A jungle expert is brought in and quells the uprising by painting white stripes on the black zebras and black stripes on the white ones. He is quickly hired by zoos all over the world for similar jobs-work that will probably last a lifetime.

November-Thanksgiving Day at the United Nations is a disaster when several waiters run into each other at a busy intersection in the cafeteria.

A badly shaken ambassador describes the scene as “the overthrow of Turkey, the destruction of China and the fall of Greece.”

December-After appearances in the Final Four and College World Series, LSU caps a banner season with an appearance by the football team in the College Football Playoffs. Athletic Director Scott Woodward spreads the credit around his coaches and staff-especially an Oriental assistant named Win Won Soon.

“Mr. Soon has great foresight and even made some startling predictions about our program that all came true,” says Woodward.

When pressed about the future, Soon gives reporters a shocking revelation.