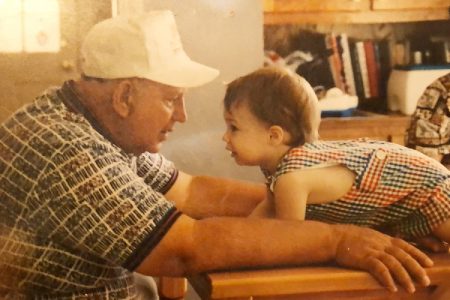 His grandson, Ronnie Johnson, said it best in his eulogy of his grandfather “If I only had a Penny” as he recalled the fond memories of his grandfather.  Penny is probably best known throughout Ascension Parish for his love!  Love of family, friends, community and music!

Back in the 1940’s when St. Amant was a community of farms and dirt roads; back when hanging out on the front porch and visiting neighbors was a daily way of life; when electricity was beginning to light homes over kerosene and the radio was the only “technology” found in nearly every home; four teenage boys from Gold Place formed a little band called the “Starlight Boys”.   With instruments in hand, the Boys walk down Gold Place Road to the local dancehall known as Gold Place Bar.  Instant stardom came with bookings at other regional juke joints like Club Forest in Maurepas, Georges Bar in Sorrento, Moon-Light Inn in French Settlement and The Music Box in Prairieville.  It was from the bandstand that he eyed a girl dressed in Red!  He would marry that girl, Earline Braud, and for 69-years of marriage he would always say he was married to the prettiest girl in the world!  And if wasn’t playing music or dancing to it, he was traveling or camping.  Penny and Earline traveled by car to anywhere the road would take them.  From California to New York, Florida to Michigan, and each year to the Great Smoky Mountains, his favorite vacation spot!

The Starlight Boys along the way added two more musicians, cousins Jansen and Mervin Babin, and changed their name to the Trademarks.   For more than 40 years, the Boys played music for dances, weddings and benefits in and around Ascension Parish.  Perhaps only Kenny Fife, Na Na Sha, or the Rolling Stones have surpassed their longevity!

Penny loved sharing his love of music with everyone who wanted to listen, dance or play.  When Penny saw his 10-year-old nephew, Gary “Snake” Templet turn cardboard boxes and a box fan into a drum set, his Uncle Penny showed up around midnight, after a gig with a real drum set for his nephew!  They assembled the drums that very night and played until dawn!

And when the Boys retired from touring the dancehalls of Ascension Parish, Penny built himself his own social club in his back yard, Penny’s Blue Room.  Penny’s Blue Room became the spot for Monday Night Jam session, where musicians old and young would gather for many years. And the strongest drink served was Miss Earline’s pot of coffee.

Penny’s Blue Room became the gathering place for family, friends, and neighbors.  For many years Penny and Miss Earline hosted Christmas parties, wedding showers, baby showers and graduation parties.  Any given Saturday night you could find Penny stirring in his pots, cooking a large pot of jambalaya or gumbo.  And usually once the meal was done, the mics and instruments came out and you could hear the deep notes of his base guitar all the way back to Gold Place Road!

For Penny, his family was his favorite melody!  His Saturday Nights mellowed into weenie roasts and John Wayne Movies; ballparks and gyms; and his grandchildren took the spotlight.  His cross-country vacations turned to short Sunday drives with his girl to Middendorf’s and the Gulf Coast!

So, when you find a penny pick it up, all day long you’ll have good luck!

And don’t pass by that penny when you’re feeling blue; it may be a penny from Heaven that an angel tossed to you!