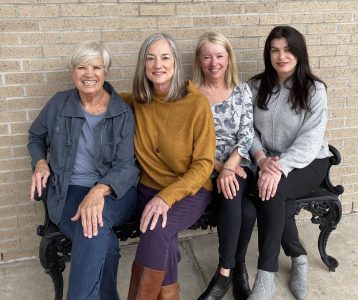 Due to inclement weather on the January 21, the annual outdoor event planned by Arbor Day Chairman Janis Poche was rescheduled to coincide with the meeting. The Arbor Day Ceremony was held in a breezeway on the FBCG campus.  Club members and a church official gathered outside the chapel near a young Natchez crape myrtle, which had been planted by Harlan Poche, Janis’ husband, last month.  Club President Jamie Trisler began the ceremony by welcoming the group and commented on the club’s long-standing commitment to add trees to the local environment for their beauty and ecological benefits. Associate Pastor Jarrod Lamberth enhanced the tone of the gathering with an invocation and thanked the club for donating “a living gift”.  He also thanked Harlan for installing it on the grounds.  Club Vice President Mary Jo Pohlig described the tree species as “beautiful all year long.”  It is a Natchez crape myrtle which produces new green leaves in the spring, clusters of white flowers in the summer, yellow/orange/red foliage in the fall, and a smooth cinnamon-brown underlayer revealed by peeling bark into winter.  Member Conchita Richey read a poem written by the late GGC Member Willie Mae Montgomery, “An Old Tree Reminisces”, which is traditional to the annual ceremony.  Member Patti Mouton thanked everyone for attending the event and expressed the club’s gratitude for the church’s generosity and hospitality in allowing members to meet at the facility over the past year.  It marked the 54th Annual Arbor Day Program sponsored by the Gonzales Garden Club.

The business meeting included committee reports, discussion of upcoming garden events in the area and plans for next month’s presentation.  President Jamie Trisler noted that newspapers can be brought to the recycling center at 42077 Churchpoint Rd. or donation centers such as Goodwill on Airline, Fellowship on Burnside, or St. Vincent de Paul off Burnside in the Eastbank Shopping Center at Hwy 30 and 44.  Plastic grocery bags can be reused at food banks such as St. Theresa Food Pantry.

Besides cleaning tools and starting seeds, the club mentioned two horticulture hints for February.  Fertilize many plants in your garden. Cut back rose bushes by one third and fertilize.  Ideally, any new shrubs and trees have already been planted so they can get their roots established before they start putting out leaves in the spring.

At next month’s GGC meeting, a member will lead the study of horticultural practices for daylilies, and S-curve floral designs will be featured.