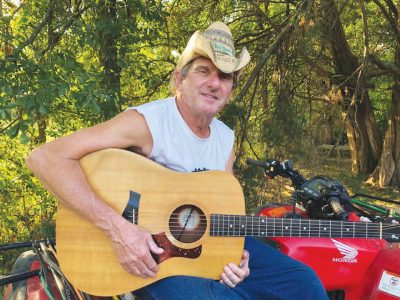 With my muzzleloader in hand, I gently focused my attention to the rustle of leaves to the west of me. I then noticed two very young deer passing my location. One was still spotted and the other evidently had just lost its spots. As they scampered off into the palmetto thicket, I began to wonder where their mother was, although I had no plans of shooting a female deer on that hunt in any case. A couple of hours had passed without any other deer encounters when I decided to get down and hang some markers to another stand location of mine. After descending, I rested the old smokepole on the side of a nearby tree to retrieve my trail markers from my carry bag. At that moment I heard noise in the palmettos where the yearling deer had  entered earlier. A large doe stepped out of that area with another animal following it. I immediately thought that the two babies had found their mother, when much to my surprise, I saw that it was a coyote that was following her. I quickly grabbed my muzzleloader and the deer bolted in a full throttle run with the coyote on her heels. I started to fire at the running target and quickly decided not to for fear of hitting the deer instead of the wild dog. It then occurred to me for the reason being that the two babies had been separated from their mom. I then again rested my firearm against the same tree as before and began to dig in my bag for the trail markers again. From the same location, as just moments before , I heard more noise and commotion and at that moment I noticed two more animals running directly at me. I naturally thought that these were the two displaced yearlings. At that point I then realized that the two animals running towards me were coyotes. As I reached for my gun, my movement frightened them and they took off running about twenty-five yards in front of me. I fired and missed the running shot sending them on their way.

That fall I often wandered back to that scenario and began to realize that this kind of behavior between predator and prey goes on constantly. In other words, I promise you that the incident of being chased by a wild dog wasn’t that old does’ first time having to endure that kind of behavior. I hear those coyotes howling in the evening fairly often. They lived there every day and night and so do the deer.

Through many years of my life in the outdoors, I’ve seen some incredible predator-prey encounters. I once saw two house dogs chase, track, and kill a rabbit while I sat viewing  from my deer stand. After the kill was made, the killer dog carried the bunny to the other dog that actually ate it while the killer sat and watched. I’ve seen hawks knock flying ducks from the sky. I once watched a hawk catch a dove in flight and drop it to the ground after being frightened by me. After hitting the ground, I picked up the dove and it flew off. On one occasion, while turkey hunting, a hawk chased a rabbit up to where I was sitting. My surprise movement made the bird give up on the adventure and it lit in a nearby tree. The rabbit sat at arms length from me up against another tree knowing that I was the reason that the raptor had given up on the attempt of trying to catch him. The hungry bird sat on a nearby branch for a while and finally flew off. Shortly after that, the bunny quietly hopped away. Another turkey hunt brought about a dive bombing expedition attack from a hawk that was aimed at a one legged hen that was feeding in the food plot that I was set up on. Don’t you know that she, believe it or not, took off flying and beat her attacker to a nearby wooded area where the villain had to give up on the effort. Just a couple years ago, I was taken out of a daze, so to speak, after sitting in one spot for several hours on a spring turkey hunt. I had noticed a hen turkey at that location that had a nest in some briars across from my setup. She would appear from that little brush patch every morning and evening to feed for a short time and then she would eventually return to her little hideout. Out of nowhere in a flash of seconds, around five o-clock that evening, I saw and heard the nesting hen putt, jump, and fly from her nest site. I was startled by what had happened when I finally laid eyes on the culprit of all the commotion that was taking place. When the coyote came in clear view of the brush, he took the last step that he would ever take. I typically don’t shoot them, but I shot that one. Turkeys already have a hard enough life to endure without having to put up with that.

Predators and prey have been living together forever. Most of these catch and kill incidents occur without being witnessed by humans. Others are visible in plain sight on a large scale such as a school of speckled trout feeding on a school of shrimp or baitfish. We may sometimes think that the only time that these events take place are when we have the opportunity to see it with our own eyes. Predator attacks on prey take place every night and day and those events are just part of everyday life in the outdoors.