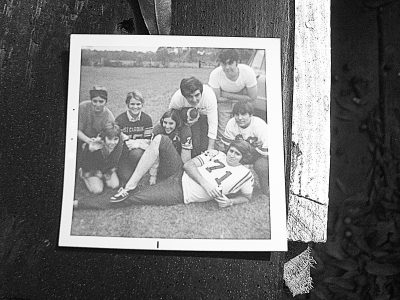 On Thanksgiving Day, 1971, the so-called “Game of the Century” took place in Norman, Oklahoma.

The teams would combine for 17 out of 22 first-team all-conference selections, and the Cornhuskers would prevail 35-31 en route to a National Championship.  But none of the participants were aware of another “Game of the Century” going on the same day in a cow pasture in Prairieville, Louisiana.

Each Thanksgiving on a makeshift field decorated with water troughs and cattle droppings as part of the 100-acre tract known as the “Delaunederosa”, the annual Turkey Bowl took place.

Men and women, boys and girls, surprise celebrities and an occasional beast would take part in a no-holds-barred football game prior to Thanksgiving dinner that would have rivaled the old Detroit Lion-Green Bay Packer classics in intensity and effort-with a slight drop-off in the talent department.

In this particular year, some of my college roommates joined my siblings and me-along with some mystery guests who arrived on Harley Davidson choppers-to put on one of the great Turkey Bowls of all time.

Modesty forbids but I did throw five touchdown passes during that memorable fray only to lose out on the coveted MVP award because all the girls voted for my roomie Tommy Solis because “he was so cute”.

The real action started later at a crowded dinner table when the food was served and there were more flying elbows than an Irish bar on St. Patrick’s Day.

Now there was always a big crowd of in-laws and outlaws at our Thanksgiving table and my mother turned no one away.  She was happy to have the family-and extensions-all together especially since my sister Diane had decided to run off to California earlier that year to see the Pacific and try and set the West Coast on fire.

Anyway, the prodigal daughter had returned and-we assumed-brought a couple of bikers back with her.  No matter-the food was hot, the beer was cold and we even celebrated with a fine, red wine-Boone’s Farm Strawberry Hill, I believe-as this motley crew of friends and folks sat down to eat.

After dinner there was another mad scramble for the precious few” good seats” in the living room to watch that other “Game of the Century” that all the sportscasters kept talking about.

Woe be it to the person with a sofa position who had to go to the bathroom during the game because that spot would be occupied upon his/her return.

Ironically, the only real “gentlemen” in the entire group were the two motorcycle guys who make sure all the “ladies” had seats before politely taking their place on the floor in front of our massive 24-inch television.  They even cheered when Nebraska’s Johnny Rodgers returned a punt for a touchdown because I had casually mentioned having a small financial interest in the Huskers.

At halftime the bikers got up, thanked everyone profusely for the hospitality and roared off-“Easy Rider” style- toward New Orleans.

My mother, who was a sucker for manners not having witnessed an abundance of etiquette among her own, remarked how impressed she was with the Davidson duo’s manners despite their scruffy exterior.

“Just goes to show you can’t judge a book by its cover,” she said.  “And Diane, that was very nice of you to invite your California friends over for Thanksgiving.  Those boys probably had nowhere to go”

My sister stopped massaging an alleged “injury” that Tommy had received to his leg during the Turkey Bowl and shot a confused look across the room.

“My friends?  I thought they were Bill’s friends.”

As far as I know they might have been Peter Fonda and Dennis Hopper off to find America and they probably will be during the next retelling of this story.

Anyway, I’m thankful for the memories I have of the “good old days”-of friends and family and-sometimes-total strangers.  But I also have a lot to be thankful for these days also.  I know it’s not my usual style but I’m allowed to get a little sappy during the holiday season.  And don’t worry-I’ll try to have something crude and sophomorically vulgar for you in the next issue.  Let’s start with…

All three east side high schools made the playoffs (and so did Donaldsonville on the west bank) giving new meaning to the term student-athletes in this parish. And allow me to gush for a moment over my Dutchtown senior grandson Will who has maintained a 4.0 average while gaining honors in both football and baseball.

And if we are lucky enough to get a rematch with any of the teams in the playoffs-well, what a party that will be.

I cite baseball because of its universal appeal from the Far East-Japan and Korea-to the Caribbean, from Canada down to South America; everybody loves “America’s Pastime”. Besides, as that great American philosopher George Carlin once pointed out, “Football is a game that involves bombs, blitzes and field generals. The object of baseball is to get home safely.”

Add music to the equation-no matter what the beat-and you have the perfect solution to all the world’s problems. So what better spot to start the movement than right here in Ascension and surrounding parishes.

I’m so thankful for the great baseball we have in this area-from parish and city leagues to travel teams, from high school squads to the LSU program which leads the U.S. in attendance year after year.

And what about the music down here. From Swamp Pop to hip-hop, from country to gospel, from big bands to one-man acoustic shows, on any given night you can find a gig that suits your taste. So just imagine, if I may borrow a line from one of my idols John Lennon, people of all races, religions and economic levels gathering at a local park to watch a ball game and then, in the seventh inning, swaying and singing Harry Caray style, “Take me out to the ball game…”

Even those on the short end of the score would be winners that day.

Anyway it’s always a good time at the old track-even when your longshot goes off at 20 to one and comes in at 20 after two.

Throw in two beautiful daughters-in-law and a just-as-beautiful grand daughter-in-law, and a wife that has put up with my Peter Pan existence for 49 years now, and you can see I’m a lucky man indeed-no matter what happens at the track.

In fact, my favorite comments begin, “Bill, I read your column every month but sometimes I don’t know what the hell you’re talking about…”

That’s quite all right. I write the thing and sometimes I don’t know what I’m talking about!”

Happy Thanksgiving and be more thankful for who’s at the table than what’s on it.