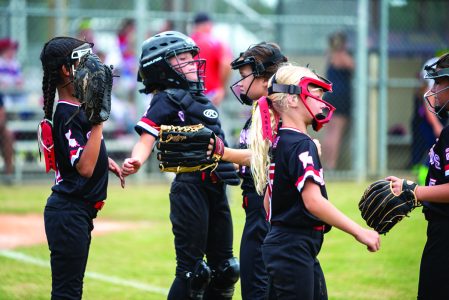 ASCENSION OUTLAWS 8U 2021 LOUISIANA USSSA FALL STATE CHAMPS   RANKED NUMER 1 IN LA. AND # 2 IN THE ENTIRE NATION IN USSSA

The Ascension Outlaws 8u girls fastpitch travel softball team is a team comprised of youth girls who have not yet made, nor will turn 9 years old during 2021 . They follow in the footsteps of some very talented girls from Outlaws 8u team last year who moved up in age class this fall.

This years new Outlaw 8u team was picked by the coaches from a pool of  11 young ladies that showed up to tryout in August with the majority(7) of the girls coming from several Rec Ball teams out of Butch Gore AYSA while just 4 had a full season of experience playing travel ball last year, so it was a struggle in the beginning learning each other,then it rained out some practice and games, then the heat, and then several weeks of postponements due to Hurricane Ida damage.

Finally on September 18th the Outlaws opened up their fall campaign in Youngsville, La. For a one day tournament and defeated Thunder Elite 15-4, lost to a good Slam 13 team 15-12, and split the last 2 games to finish 2-2 and 3rd place. Paisley Hill, Korinne Roccaforte, Gabby Grace, and Baylee Smith all had excellent weekends at the plate with 5 hits each.

Another one day tournament in Erwinville. La. on September 25th was next and the Outlaws destroyed 3 first year teams by scores of 19-2, 23-5, and 22-0. Baylee Smith and Suzie Clark each hit 2 homers and had 9 hits in 3 games. Olivia Simcoe, Katelin Korner, Korinne Roccaforte, and Amirah Miller all had multiple hits in all 3 games.

Another trip to Youngsville followed on the weekend of October 2 and 3rd where the Outlaws had a much better experience this time, winning 6 games and losing 2. Arguably what was probably the turning point in the Outlaws season happened in two games that weekend, first a 18-16 victory over the West Monroe, La. Lady Sox on Saturday and then on the final game of the long weekend Sunday,  the game that really got the team rolling was  a 27-23 loss to Reloaded in a game where the Outlaws trailed at one point 19-5, came back to lead 20-19 and had the tying run at the plate when the game ended. It would turn out to be the final Sunday of the season that we went home without a championship ring.  The bottom of the batting order was on fire with Ahmarra Bell, Brynlee Gill, Bayler Hampton, and Katelin Korner going a combined 10 for 12 against Reloaded. Other notable performances that weekend were Olivia Simcoe, Baylee Smith, and Gabby Grace having several multiple hit games.

The team took a much needed rest and weekend off October 9-10, but was back at it October 16-17 for a 4 team tournament in Watson. In the first game vs Lady Fury Blue Suzie Clark led the way slamming 3 home runs with 8 RBIs, while Amirah Miller and Korinne Roccaforte banged 3 hits each. The Outlaws then proceeded to defeat Lady Fury Pink twice and Rippers to advance to the championship round vs Lady Fury Blue. Gabby Grace, Bayler Hampton, Baylee Smith, and Ahmorra Bell led the hitting parade while Katelin Korner and Suzie Clark each added home runs leading up to the championship. Lady Fury Blue played really well in the championship rounds but the Outlaws were just too strong, defeating them twice 20-19 and 21-14 to capture the championship. Korinne Roccaforte, Gabby Grace and Bayler Hampton led the way while Suzie Clark was an unheard of 17 for 18 with 5 home runs and 21 RBIs over 6 games in the tournament. Lady Fury Blue will be the local team that will give us the most competition in the spring.

The final weekend of the season was the Louisiana USSSA state tournament right back in Watson October 23-24. Surprisingly only four 8u teams entered the state tournament: Louisiana Canes from Destrehan,La., Lady Rippers 13 from Lutcher,La. Ascension Outlaws and our nemesis from Lafayette, La. Slam13. Outlaws opened up the tournament by making short work of the Canes 13-1. In their most complete game of the season to date the Outlaws run ruled Slam 13 by a 15-1 score in the next game with Korinne, Olivia, Amirah, and Suzie all banging out 3 hits each while Brynlee Gill smashed a home run. The first game of bracket play saw the Outlaws again run rule a opponent this time Rippers 15-1. Baylee Smith, Gabby Grace and Katelin Korner each hit home runs. Outlaws then bested Slam13 again 18-11 and Canes 12-0 setting up a championship game vs Slam13. In one of the best 8u games you will ever see , Outlaws outlasted Slam13 in 7 innings by a score of 12-11. Korinne, Amirah, and Suzie each had 3 hits in the championship game and it was exceptional defensive plays by Olivia Simcoe, Brynlee Gill, Paisley Hill , and Suzie Clark that sealed the deal. The entire team played well.

In the final two tournaments of the  fall season the Outlaws 8u went 12-0  outscoring its opponents 192-70 and capturing the championships of both tournaments,, the latter being the USSSA Louisiana State Championship in which they avenged earlier losses to Slam 13 by hammering them twice and breaking their hearts in the championship game.

#1 in the State of Louisiana for USSSA 8u open division

And #2 ranked USSSA 8u team in the NATION

On November 18th, 2021 the Ascension Parish Council honored the girls for their accomplishments on and off the field this past fall season at the monthly council meeting.

The Outlaws 8u will resume practicing sometime in late January or early February, games in mid to late February and most certainly will be up against some vastly stronger group of opponents in the spring as only about 1/3 of the 8u teams play fall ball and also in the fall the better teams were all in North Louisiana, not to mention every team will want a piece of Outlaws since They will have a bulls eye on their backs as Louisiana  Fall State Champions. But to be the best you have to beat the best !! The Lousiana State Championships for spring will be

A schedule of games should be released in February for the spring season that starts in March and ends July 31, 2022. All but 1 player(Paisley Hill) will have to “age-up” to 10u beginning August 1st, 2022.